October 9, 2013life by wordhabitLeave a Comment on unpacking day 1: creating 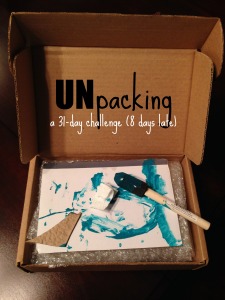 i haven’t always understood why the ability to make something out of something else is important to me. several childhood memories, though sparse and probably inaccurate, find me taking apart an old stereo, developing a new card/board game (and teaching my family how to play), preferring legos over barbies (though barbies possessed a sort of social class boost that was temporarily attractive), and seldom being interested in following instructions–why do that when something inside of me itches to figure it out herself? perhaps that’s code for “stubborn”…yeah, whatever.

this mixture of intrigue, vision, building and problem solving has led me down many frustrating paths where the end product is nowhere like the picture. this mixture has also helped me get up in the morning or get on with the afternoon because i’m certain that something greater will emerge…soon. and in more recent years, it’s helped me realize that i need–yes NEED–to create.

this has led to many frustrating days when creation is far from what’s needed or necessary. if my work day doesn’t allow for it then i’ll start a project at home, discover that a scarf must be knitted. but it doesn’t get completed because other things come up, other non-creation times and other opportunities to create. only five rows in, the scarf becomes a distant memory. now it’s on to a fall wreath. and then decorating our garden fence…yeah, you get the picture–i don’t always complete my creations. but i value each one for a time. and if there’s enough incentive, i eventually return.

not only do i need to create, but i need to create using my hands. the learning i enjoy most is typically somehow tactile. so the experiences i often enjoy most involve the ability to feeeeeeel, even on an emotional level. just last year, i learned that i really like giving and receiving genuine hugs. perhaps i’ll unpack that another day. feeling is so complicated. it may require two posts.

whatever the case, creating is, for me, a requirement. when i realized that, it was freeing. i’m now so aware of it that if i’ve had a really taxing week, i’ll map out a creation plan for my day off. and, better, yet, i’ll map something out that can actually be finished in that day without taking up the entire day. it’s a non-negotiable reset button that ushers in cloud 9.

It’s Wednesday. Last week Monday, a member of my church died. She was our matriarch. In her honor, we had a time of singing and prayer instead of the usual sermon during our worship service on Saturday. Minutes after worship, I got word that another member had died. She’d been sick for a while and […]

As I got closer to my favorite coffee shop, I could tell it was full but I chose optimism, parked my car and went inside. The owner saw me, smiled, then looked around seeing what I had just seen—not a single seat. I kept looking around; maybe I’d missed one. As my eyes looked left […]

No. I’m not having a wee one. It’s that the days feel as unpredictable as newborn days, unpredictable except for the sleepless part. But replace sleepless with restless. I sleep but I’m worn out. Forever tired. At least 8 days out of 7. And so often wondering, is this it? Is this really going to […]