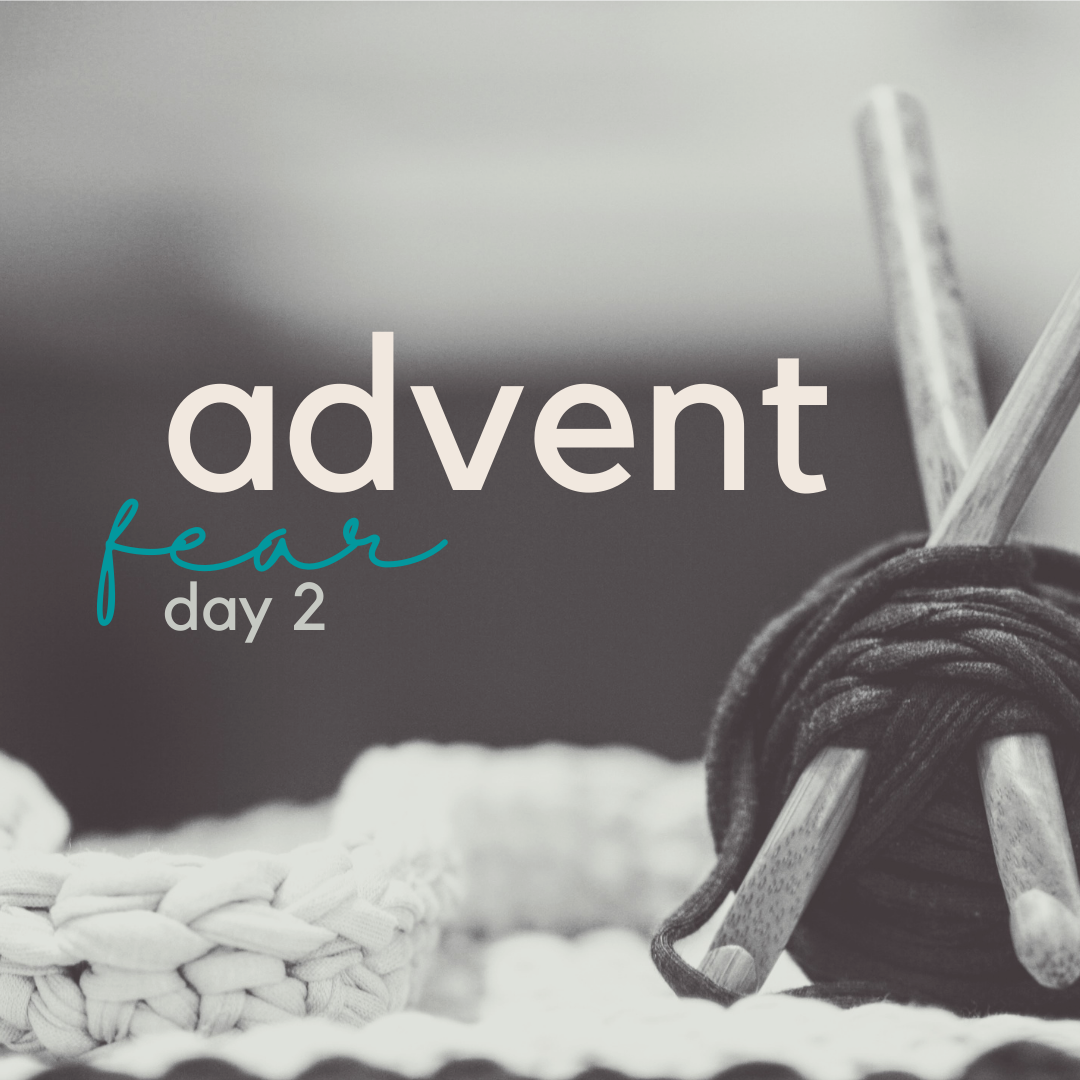 December 2, 2020life by wordhabitLeave a Comment on advent (day 2) fear.

I share two pieces on my podcast. You can also read them, if you’d prefer. Major kudos to the readers.

One thing I find fascinating about Advent is that it was originally not only a focus on the birth of Jesus but also the second coming of Jesus.

Why did that change?

Perhaps that’s why Advent is now primarily focused on the first coming. Ushering in the birth of a child who will save us is good news. So we’ve created intentional reminders of this longed for event. Our Advent calendars bring on all the warm fuzzies. The second coming is a pending doom, quite the downer next to pine trees with colorful balls, earthy-scented candles, and Christmas playlists.

Important side note: What if hell isn’t an eternally burning fire and what if the judgement isn’t something to fear?

I’ll get back to that in a moment.

First I have to remind myself that I’m looking at Advent to understand the season and also to re-appreciate Jesus. I’m guessing re-appreciate isn’t a word. In addition the idea that one could appreciate Jesus feels shallow. Like when you do something and someone replies with, “Preciate cha!” They obviously don’t because if they did they’d further unpack their gratitude. “It really meant a lot to me when you stopped by,” sounds a lot more sincere than “Preciate cha.”

Unfortunately, I feel as if I’m at this shallow appreciations stage with Jesus. I know who he is and what he’s done but it’s not gripping me. Exactly what should it feel like, Michaela? I dunno. Like more?

It’s quite strange, my current state, because the life of Jesus compels me to help others get to know him for themselves. There’s nothing terrifying about a life with Jesus. Yes, our days aren’t always simple to navigate but a belief in Jesus is a gift that opens us to hope both in this world and in the world to come.

Speaking of the world to come, I’m quite excited about the second coming. Here’s why. I don’t believe there’s anything to fear. If we want to live with Jesus forever, he knows it and he’ll get us there. If we don’t, we’ve revealed that to him and his not going to force our hand or trick us into heaven and the new earth. It saddens him deeply when we reject him but he’s not going back on his decision to give us free will.

I do believe in a judgment but I’m not afraid of it because in that judgement I’m not the one being accused, it’s God. And everything from the beginning of life to the end of life on this earth will reveal his goodness. So there’s nothing to worry about. The judgement is good. I already know that God’s reputation stands and he wins the case.

Typing this out gets me really excited. The first advent leads to the second and both are good, both are necessary, both are really good.

By the way, no one burns forever—that idea goes against God’s character.

There’s nothing to be afraid of.

Something just clicked for me.

My connection time with God hasn’t been what I think it needs to be. I haven’t been interested in times of extended prayer. I mean, I’ve been interested as in, “Yeah, I should do that.” But I’ve been reluctant. I was sick for about a week and as I was getting better I realized the tight connection between our mental and physical wellbeing and our communication with God. I wasn’t in-hospital sick. I was “I feel terrible” sick. I was drained. I spent time curled up on my bed under blankets trying to get warm. I didn’t desire a tete-a-tete with Jesus. I wanted relief. And I slowly became afraid that not connecting was moving me so far away from God that it would take a herculean tenacity to get back to my morning chats.

Advent is an opportunity to remember the angels said to the shepherds in Luke chapter 2 and verse 10 through 12: Don’t be afraid!” he said. “I bring you good news that will bring great joy to all people. The Savior—yes, the Messiah, the Lord—has been born today in Bethlehem, the city of David! 12 And you will recognize him by this sign: You will find a baby wrapped snugly in strips of cloth, lying in a manger.”

He’s here. As a result of this good news, we have nothing to be afraid of. The bright lights of a host of angels doesn’t intimidate us.

The birth of Jesus and the second coming of Jesus are both reminders of the constant state of confidence within which we can live.

One of the ways to get my dad to overreact is to say the lyric, “I lay me down.” By now, I think he loves getting worked up about the lack of substance found in this song. He huffs and puffs while the rest of us laugh. What should we be singing? There’s a lot […]